With the passage of the new Healthcare Reform Bill by Congress and a number of other related events, the Trustees of the Knights Templar Eye Foundation, Inc. on August 14, 2010, voted to move out of case processing and redirect the dollars allocated for treatment to research and education.

Effective December 31, 2010, the Knights Templar Eye Foundation will no longer be participating in direct patient care except as is currently done with the Seniors Eye Care Program in partnership with Eye Care America and the Foundation of the American Academy of Ophthalmology.

There were a number of other circumstances involved in the decision such as compliance with the Health Insurance Portability and Accountability Act privacy regulations, computer software replacement, staff retirement, etc., but primarily, the passage of national healthcare was the underlying factor.

The need for our services will be greatly reduced or eliminated. Further, the Knights Templar Eye Foundation had moved over the years from primarily treating children to almost exclusively treating adults for cataracts. Additionally, our cases were processed primarily in only about 25% of the United States due to state government programs. The trustees further felt that research benefits everyone’s eyesight no matter where they live, whether in this country or in the other countries where the Grand Encampment has Grand and Subordinate Commanderies.

We have learned over the years that our efforts in funding pediatric ophthalmology research have been the primary reason that we have had fewer and fewer children with strabismus (crossed eyes) to treat. Our research dollars have helped develop new, non-surgical treatments for this problem.

Your Trustees are excited about the prospects of being able to benefit more of humanity by redirecting your generosity from treating 2,000 individuals per year to benefiting untold millions in generations to come.

The Grand Commandery of Indiana, in conjunction with the Grand Encampment of the United States of America, sends Christian Ministers to visit the Holy Lands. There they get to walk were Jesus walked while on Earth and visit sites mentioned in the Bible. Pictured below is Sir Knight R. Frank Williams, Past Grand Commander of Indiana, (lower right) and one of the groups of Ministers while on their Pilgrimage. 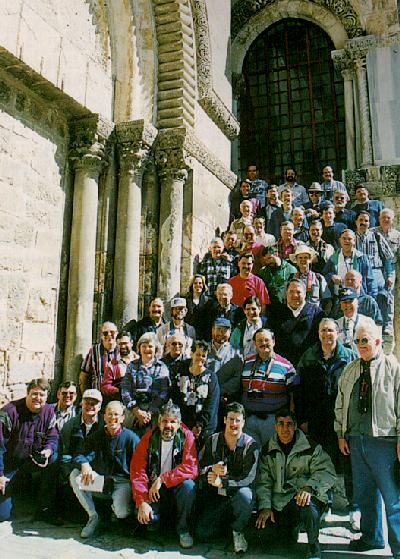 Grand Encampment is planning a trip every year. We ask you to pray for our program and for peace.

"...Freedom can only exist in an Educated Society..."

How the Foundation Began

In 1922, the Grand Encampment launched the Knights Templar Educational Foundation with these words: "We feel the Grand Encampment can build no greater monument than to put into effect a plan which will provide educational advantages for the youth of our beloved Country, thereby enabling them to become more useful members of society and better citizens of this Republic." The Foundation was sustained and perpetuated by each Sir Knight paying annually the sum of $1.00 for a period of nine years beginning July 1, 1924. Half of the assessment was placed in the Fund for direct investment and the other half was made immediately available for student loans by allocation to the individual Divisions on the basis of their original capitalization-the 1922 membership.

The Educational Foundation is a Trust Fund administered by the Committee on the Educational Foundation of the Grand Encampment of Knights Templar. The national Committee supervises the loan activity among the 50 Divisions (Grand or subordinate Commanderies) which administer the funds and process loan applications. By regulation, the Grand Recorder of the Grand Commandery is the Division's Secretary-Treasurer. The Foundation, recognizing the need for education is essential, provides financial assistance for vocational, technical or professional training and for undergraduate (last two years) and post-graduate study in accordance with the policies conforming to the Regulations and Standard Practice of the Foundation.

The Knights Templar Education Foundations (one in each state) are autonomous in each state. Each state has different rules and decision processes to award loans or scholarships. In Indiana, up to the year 2007, we helped needy students by providing loans up to $3,000 for each of their junior and senior years, with a maximum of $6,000. These loans were at 5% interest and required repayment on a regular monthly basis beginning 6 months after graduation.