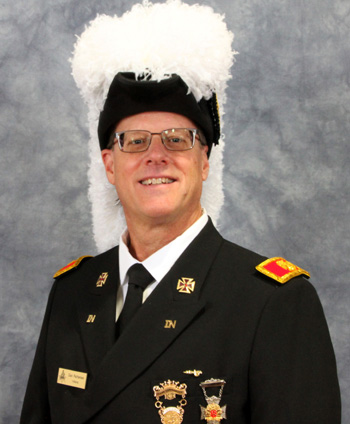 Born in May 1961 in Fort Wayne Indiana to the parents of Dan & Betty Patterson. Graduated from Paul Harding High School in 1980, attended IVY Tech State College and became a Certified Welder. I was hired by Almet Inc. (Steel Fabricator) in 1981 and have progressed over the years to the position of Senior Estimator. I married my lovely wife Karen in 1983 and we have one son. He is now married and we have a wonderful daughter-in-law. We have been blessed with a beautiful little granddaughter and recently a new grandson.
I joined Sol D. Bayless Masonic Lodge #359 (Blue Lodge) in 1997 and followed shortly after joining the Fort Wayne York Rite and the Scottish Rite. Recently I have been blessed with becoming a Knight Mason, a member of Angola Preceptory #2 Yeomen of York and Pokagon AMD #147. Additionally, I am a dual member of Auburn York Rite.